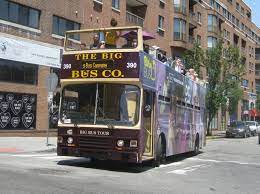 Take a hop-on hop-off bus tour of Philadelphia that highlights over 100 years of history. Explore the sights of Philadelphia from an open-top bus, enjoy the 16-mile journey with 28 stops to hop on and off at, experience the Liberty Bell and Betsy Ross House, climb the 72 stone steps that Rocky once climbed, and a visit to the legendary Eastern State Penitentiary (not included).

Discover the city where America’s Founding Fathers first declared independence, and ratified the US Constitution and Bill of Rights. Along the way, enjoy stunning views of historic landmarks including the Christ Church Burial Grounds, Elfreth’s Alley, the Betsy Ross House, and Independence Hall. Begin your tour at the Bourse Building, across from Independence Hall and the Liberty Bell. Listen to the multilingual audio commentary as you enjoy the views from the open-top deck. See the Friendship Gate in Chinatown and be amazed by the architecture of Philadelphia’s City Hall.   Hop off to explore the various museums along Benjamin Franklin Parkway, including the world's largest collection of post-impressionist art at the Barnes Foundation. Marvel at Philadelphia’s skyline and stop to enjoy a bird’s-eye view from the One Liberty Observation Deck. Pass through the charming neighborhood of Society Hill and end your tour with a drive along the banks of the Delaware River. Stops:  • The Bourse Building  • Betsy Ross House  • National Constitution Center  • Chinatown  • Reading Terminal Market  • Love Park  • Cathedral Basilica  • Logan Circle  • Rodin Museum  • Eastern State Penitentiary  • Special Events - The Perelman Building  • The Rocky Steps and Statue  • West Entrance of the Philadelphia Museum of Art and Boat House Row  • Civil War Memorial  • Please Touch Museum  • Philadelphia Zoo  • Franklin Institute  • Mutter Museum  • One Liberty Observation Deck  • Avenue of the Arts  • Society Hill, Antique Row  • Mother Bethel A.M.E Church  • Headhouse Square  • Vietnam & Korean War Memorials  • Penn’s Landing  • Museum of the American Revolution  • Christ Church  • The Liberty Bell. These are only some of the sites you will see on this Big Bus Tour. https://www.bigbustours.com/en/philadelphia/philadelphia-bus-tours

The well-known and loved story of Betsy Ross sewing the first Stars & Stripes is tightly woven into the colorful fabric of America's rich history. The Betsy Ross House, the birthplace of the American flag, is alive with the sights and sounds of the 18th century. Tour the house and then stay a while longer to learn more about Betsy and her exciting life and times through our interactive, historical programming. http://historicphiladelphia.org/betsy-ross-house

An American First – Like many other Philadelphia landmark and institutions, Philadelphia Zoo is an American first. The charter establishing the Zoological Society of Philadelphia was approved and signed in March 21, 1859. Due to the Civil War, however, it was another 15 years before America’s first zoo was ready to open on July 1, 1874.

Philadelphia Zoo - The region’s leading family destination is home to nearly 1,300 animals; many are rare and endangered. Each year, Philadelphia, Zoo educates more than 1.2 million visitors about animals environmental conservation. Via a first-in-the-world animal travel trail system, Zoo360, and KidZooU- a children’s zoo and education center that serves as a model for children’s zoo’s nationwide. https://philadelphiazoo.org. Tour includes admission to the zoo any add-ons will be at an additional cost. Add-ons and pricing will be available late Winter of 2022.

We will have a dinner stop (not included) at the Urban Saloon http://www.urbansaloon.com
2120 Fairmont Ave. Philadelphia, PA 19130.